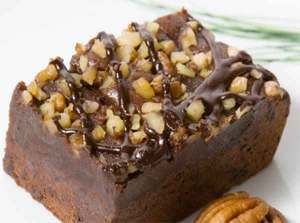 Of course you do. Unlike most culinary masterpieces, the brownie has a distinct and pedigreed history. We know exactly where it came from, and therefore know exactly who to thank.

Get out those knee pads, folks. Open those wallets and pay homage to: 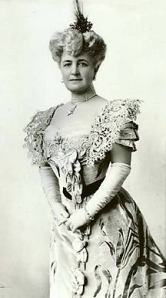 Swag her the fuck out.

Bertha Honoré Palmer, wife of the legendary Potter Palmer (a important figure in the creation of the legendary Marshall Field’s department store and owner of the Palmer House Hotel), known as the “Queen of Chicago”, and the patron saint greedy people everywhere.

As  the legend goes, while on the “President of the Board of Lady Managers” committee as part of preparations for the Worlds Fair of 1893, Bertha decided that there should be a dessert that ladies could eat without need for plates or utensils. Bertha dictated that the dessert should be like a cake…but smaller.

THIS WOMAN IS A GENIUS.

Now, in the Hallmark channel adaptation of this wonderful event in American history, Bertha would have rolled up her sleeves and tottered into the kitchen, full of pluck and determination. Only emerging covered in sweat and flour with the bright smile accomplishment spread across her face.

Would you like to know how unlikely that scenario is? From Bertha’s wiki page:

Bertha Palmer was famous for her free spending ways and her husband indulged her and did not mind that she was in the limelight. Her jewelry was legendary. According to the author Aline B. Saarinen, “so fabulous were her jewels that a newspaper declared that when she appeared on the S.S. Kaiser Wilhelm der Grosse with a tiara of diamonds as large as lima beans, a corsage panned with diamonds, a sunburst as big as a baseball, a stomacher of diamonds and all the pearls around her neck, Alois Burgskeller of the Metropolitan Opera, who was singing at the ship’s concert, was stopped right in the middle of a high note.” She traveled throughout Europe, dining with Kings and Queens and mixing with industrialists and statesmen.

What this tells us is that Bertha was as familiar with a kitchen as I am with…well wearing a tiara with diamonds the size of lima beans (but I have DREAMS).

Being a resilient young lass, short on time and long on money, Bertha simply instructed the chef at her hotel to whip up such a confection. LIKE A BAWSE.

And thus the brownie was born.

A few other notable achievements:

So lets all raise a glass of milk to Bertha. Fighter of social ills, kickass hostess, responsible for making Florida “happen”, and catalyst for the creation of the perfect #foreveralone snack. The brownie is still being served  at the Palmer House Hotel in Chicago, in Potter’s Lounge accompanied by “chocolate milk mousse, chocolate ice cream and chocolate sauce”. Or, commoners can make it themselves using the original recipe.

I think we know which option would merit Bertha’s seal of approval.