But what if you’re NOT a long haired thick redbone?

Don’t you just hate it when real issues  creep into your carefree Saturday afternoon? Yeah, me too.

Because what I’m about to talk about actually happened, I want to make it clear that I’m not trying to call anyone out or make them feel bad…even though I feel like calling certain people out and making them feel bad is at the very crux of this issue.

Yes, folks. Its another “black women do this and that” post. But hey, at least its not a study!

I wasn’t looking for this to happen. I don’t even know how the discussion started but all of a sudden I hear “well, I like natural black girls”. Which, ok thats cool right? Brothas should show love to our natural haired sisters! Please continue sir!

“You know, the kind without all that fake hair and nails and shit”.

It was at this point that I kinda rolled my eyes and went to the bathroom, not really interested in getting into one of those discussions again…but somewhere between staring at the flyers advertising karaoke bingo (I still haven’t figured out how that works) and examining my recently acquired tan in the mirror I decided I very much DID want to have that conversation.

I often hear about these kinds of statements being tossed around by men. Rarely a week (or lets be honest, a day) goes by on twitter where some kindly gent doesn’t pop up to share his opinion on black women, and how the things we do make us such undesirable mates. How we should have perky tits, tiny waists, and big asses (fuck genetics), long curly hair (shout out to Yung Berg), light skin (shout out to Weezy), make money (but not too much), be smart (but not more educated than him. or something), fuck freely (but never get pregnant), be good at every possible kind of sex (but not TOO good, cause then you just a ho), support your man no matter what (unemployment, infidelity, incarceration, it doesn’t matter. HOLD HIM DOWN…but don’t ever question him), and…well I could go on forever. Because they do. I’d say just search ‘black women’ on twitter and you can receive a list longer than the first draft of the bible on how to be the “perfect” black woman.

Many of the most repeated “requirements” are physical, basically if you don’t look like Ethnically Ambiguous Video Girl #4 you’re not even going to make it past round 1. So, say you aren’t born looking like Kim Kardashian (if you’re bored, tell a brotha that even Kim Kardashian wasn’t born looking like Kim Kardashian and watch the light go out of his eyes…before he calls you a hater) whats a girl to do? Well, you could get a weave, contacts, an acrylic layer on your nails, colored contacts, liposuction for your midsection, ass implants to achieve that perfectly clappable booty, breast implants if you’re lacking. Yes, you’ve put yourself into massive debt and look so different that your mother wouldn’t recognize you in a lineup even if you were holding a DNA test proving you were hers…but NOW you can get a man. You’ve achieved the ideal.

Back to my young friend at the bar. This person is a African American chap, the brother of a friend. He has multiple tattoos and piercings and dresses in “hip-hop” (I’m sorry. I’m old now and I don’t really know what to call this) style.  I’m sure that at some other time we could have had a conversation about how unfair it is that people probably make a host of assumptions about who he is, based on how he’s decided to present himself to the world. How awful is that someone can summarily dismiss your value as an employee/tenant/partner/etc because you have brown skin/facial hair/piercings/etc. I would totally commiserate him and *shake my head* and decry the society that stereotypes and limits people without any thought to their personal motivations.

Too bad he wouldn’t be able to see things on my side of the coin.

Interestingly, the other person taking part in the conversation was a friend of mine, a Puerto Rican woman. Just last week we sat around together and searched on the internet looking for places to get “crazy” nail art done. Last summer she went to my hair stylist to get looong curly extensions sewed  into her hair (I’ve never had extensions, but my stylist is an expert in them), and she occasionally wears a long weave ponytail when she feels like it. Apparently while I was off in the loo, she brought all this up to dude and he was like…”well its ok cause you were just doing it for fun”. Luckily I arrived right then, ready with a heaping helping of OK BUT U WRONG DOE. By this logic, its ok for a Puerto Rican girl to get a weave because you’ve decided that…well I don’t really know. And he couldn’t articulate it.

Why is it that if a black girl switches her look up it automatically labels her as ghetto? When I was a younger Shikagoland, my mother expressly forbid me to get designs or whatnot put on my nails, so worried was she that people would judge me as trash. Now, a quick trip to your local Walgreens will turn up an entire aisle of things to aid you in “expressing” yourself through nail art. Going to the beauty supply store in your hood and buying a weave? Ghetto. Going to Nordstroms and buying a blonde ponytail to wear to a bachelorette party? FUN.  A black girl in dreads or an afro? Militant. A white woman in dreads? A free spirit.  A white or Asian girl can cut her hair asymmetrically and die it ten thousand colors and she’s so “cool” and “edgy”. A black woman who does the same (and frankly, I’ve been seeing black women with candy colored hair since I was a wee one) is ghetto.

In order to test this theory, I just googled “cool hair” and “ghetto hair”. These are the first results for each. 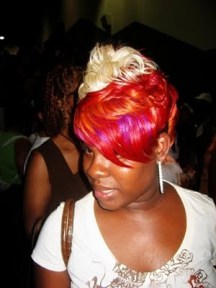 I’m going to assume that these don’t need captions for you to know which search term generated which result.

On some level we are always judged by our outward appearance. All of us. People are people. We judge each other. But there is something particularly damning about the judgements lobbed at black women. These quick judgements are almost never restricted to the individual, but spread out amongst us all. And somehow opinions about our value systems, intelligence, socio-economic status, etc are formed based on things as silly as a style we might only be bothered with for a week or two. If you don’t understand that these wholesale judgements of a entire group of people seep into, for example marriage rates or hiring practices (even for people who don’t fit into the stereotype), then you’re just not trying.

However, lets also be honest. A lot of our young girls are running around, completely ashamed to be who they were born to be. There is no one telling them that the skin tone they possess, the hair that grows out of their heads, or the shape they develop is worthy of being admired…well not on them anyway. Praise is heaped upon women who achieve these traits when its not the norm. Angelina Jolie’s lips are exotic and sexy. Those same lips on Angelique Johnson are just big and worthy of being mocked.

So what are these girls/women left with, when their own bodies/minds/spirits aren’t “enough” and their efforts to fit into some arbitrary ideal are met with mockery and derision?

And why is anyone ever shocked when occasionally a sista might have a little attitude about being society’s punching bag? How can you even blame us?

3 thoughts on “But what if you’re NOT a long haired thick redbone?”